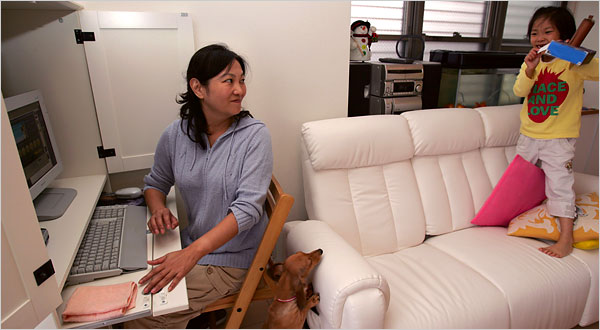 Yukari Haruzono, a computer game enthusiast in Tokyo, waited Sunday for an upgrade while her daughter, Yuho, 6, played. She pays $55 a month to be able to download data at high speeds.

Nearly eight million Japanese have a fiber optic line at home that is as much as 30 times speedier than a typical DSL line.

But while that speed is a boon for Japanese users, industry analysts and some companies question whether the push to install fiber is worth the effort, given the high cost of installation, affordable alternatives and lack of services that take advantage of the fast connections.

Indeed, the stock price of Nippon Telegraph and Telephone, which has two-thirds of the fiber-to-the-home market, has sunk because of concerns about heavy investments and the deep discounts it has showered on customers. Other carriers have gotten out of the business entirely, even though it is supported by government tax breaks and other incentives.

The heavy spending on fiber networks, analysts say, is typical in Japan, where big companies disregard short-term profit and plow billions into projects in the belief that something good will necessarily follow.

Matteo Bortesi, a technology consultant at Accenture in Tokyo, compared the fiber efforts to the push for the Shinkansen bullet-train network in the 1960s, when profit was secondary to the need for faster travel. “They want to be the first country to have a full national fiber network, not unlike the Shinkansen years ago, even though the return on investment is unclear.”

“The Japanese think long-term,” Mr. Bortesi added. “If they think they will benefit in 100 years, they will invest for their grandkids. There’s a bit of national pride we don’t see in the West.”

Such a strategy may seem anathema in the United States, where companies like AT&T and Verizon Communications, the market leader with 1.1 million fiber subscribers, are under intense pressure from investors to justify their capital spending plans. And analysts note that the Bush administration has largely stood on the sidelines rather than provide financial incentives to promote fiber services.

“While you might not want to replicate the same pathway as other countries, we are falling seriously behind,” said Charles H. Ferguson, author of “The Broadband Problem.”

But even without Japan’s tax incentives, N.T.T. and some other Japanese companies say that selling fiber lines makes sense because their older copper networks need to be replaced anyway, and because they have to develop services to offset the decline in revenue from traditional phone lines.

And while acknowledging that initial investments are expensive, N.T.T. and KDDI, the second-largest phone company, expect to recoup some of their money by selling additional products, like Internet phone and television services, that are delivered over fiber lines. They also expect electronics companies to produce an array of products that rely on fiber networks, including high-definition videoconferencing equipment and medical devices that can instantly relay X-rays between hospitals.

“The cost of installing the service will continue to go down by leaps and bounds,” said Kazuhiko Ogawa, general manager of the network strategy section at N.T.T. “In the future, we will establish a lot of alliances and applications that will combine stability and reliability.”

But while millions of users have signed up for fiber connections, far fewer have bought additional services.

For Yukari Haruzono, an online game enthusiast, a high-speed fiber line is the difference between surviving and thriving in the game EverQuest.

“I play every night and on weekends, and it’s much faster and more stable than other broadband,” said Ms. Haruzono, who pays about $55 a month for service that lets her download data at speeds up to 100 megabits a second, roughly what Verizon offersin the United States. “All my friends have fiber connections, too, because they are gamers.”

But Ms. Haruzono, who has a fiber line from KDDI, buys her phone service from another company. She and other users were alarmed by technical glitches that shut down N.T.T.’s Internet phone service for several hours this year. She buys her television from the satellite provider SkyPerfect.

Over all, only about half of N.T.T.’s fiber customers sign up for Internet phone service in addition to their broadband, and just over 43,000 also subscribe to a video plan. In the United States, nearly half of Verizon’s fiber customers also get a television package, and nearly all of them use its phone service.

Japanese carriers have been slow to sell bundles of services because they face some competition from cable providers, their natural rivals.

Just 20 percent of Japanese households subscribe to a pay television service from a cable or satellite provider.

By contrast, Cablevision, Comcast and other American cable providers have been selling phone services that have helped them take millions of customers from Verizon, AT&T and other phone companies. Verizon and AT&T have retaliated by selling their own television services.

Japanese phone companies have been unable to follow suit because of a law that limits their role in the broadcasting business. As a result, N.T.T. resells programming from SkyPerfect. This gives N.T.T. less flexibility to create new services. Customers also receive no discount from N.T.T. and two different bills.

Analysts question whether users are being sold broadband lines with more speed than they need, particularly people who just check e-mail and an occasional Web site.

“Consumers buy what they think is neat and cool,” said Jim Weisser, a telecommunications consultant in Tokyo, “and 100 megabits per second is a nice round number and sure sounds fast.” But “it’s probably more speed that typical users will need for some time,” he said.

Some companies are betting that users are more interested in mobility than speed. EMobile, for instance, sells data cards for laptops and handsets that can send and receive data about as fast as a home DSL line. The unlimited data plan sells for about 5,000 yen ($43) a month, and an additional 1,500 yen buys a DSL line for a home computer.

Eric Gan, the company’s president, said this was a superior business model because the wireless network was cheaper to set up than fiber. “We aren’t losing money with fiber to the home,” he said. “We give you a big pipe for voice and everything else that is all-you-can-eat.”

Still, N.T.T. and KDDI show no sign of backing away from their fiber plans. Their priority is seeking out the apartment buildings that fill Japan’s crowded cities, offering many potential customers in one place.

Like Verizon, they have had to sign right-of-way agreements with landlords, a time-consuming process. Then they face the task of persuading individual homeowners to sign up.

“In general, people are positive about the fiber service,” said Osamu Kobayashi, a telecommunications analyst at Standard & Poor’s. “But the growth rate should slow because they’ve already gone after the condominiums and early adopters. Now, they have to go after the single homes.”

N.T.T. is also developing a dedicated fiber optic network that will provide the backbone for an array of commercial services. At its showroom in central Tokyo, it has a system that helps small-town doctors by relaying images of cell slides, X-rays and other medical data to pathologists in well-staffed city hospitals. Doctors can control the lens on the microscope to focus, zoom in and so on.

Nearby is a rubber mat developed by Hitachi that, when placed on a mattress, monitors a person’s pulse, blood pressure and other data, then relays it to a nurse or family member. Panasonic has developed radio-frequency tags that schoolchildren can carry. As they pass antennas placed outside schools and other locations, signals are sent back to parents who can be assured of their children’s safety.

N.T.T. hopes that these services, which rely on fast, dependable connections, will attract customers to its network and help solve some of the country’s larger social challenges, like the aging population, even if the payoff is not so soon in coming.

“It’s a once-in-a-century transformation,” Mr. Ogawa of N.T.T. said. “There will be more people using services who weren’t on the network before.”