When Nike recently introduced a shoe designed specifically for American Indians, the company said it was to promote a healthy lifestyle on reservations.

Skip to next paragraph
Enlarge This Image 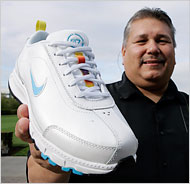 Sam McCracken, a Nike manager, with the Air Native N7. A podiatrist’s prompting helped spur the development of the shoe.

But along with its trademark swoosh, the Nike Air Native N7 features feathers and arrowheads, which bloggers have found off-putting.

“If this isn’t an example of corporate manipulation of race, I don’t know what is,” wrote one of about 200 readers commenting online about an article that appeared in The Rapid City Journal in South Dakota. There, the response to the article was split.

“What makes this a ridiculously bad move is decorating it ‘Native American style,’” added a reader identified as “la foi,” on the Web site of The Portland Mercury, an alternative weekly near Nike headquarters in Bend, Ore.

“They probably brought in a Native consultant and heard what they wanted to hear, which is that Native Americans like sunrises and rainbows and feel real connected to the earth and the night sky and stuff.”

But one of those consultants, Rodney Stapp, a podiatrist and a member of the Comanche Nation of Oklahoma, begs to differ.

“There are always going to be negative comments,” said Mr. Stapp, who is director of the Dallas Urban Indian Health Center, “but most of them are saying that because they are not really familiar with the whole process that Nike went through.”

Mr. Stapp first contacted Nike several years ago, he recalled, after he discovered that a Nike crosstraining shoe, the Air Monarch, was well suited for his diabetic patients, who had turned up their noses at “those big ugly black shoes” made specifically for diabetics. (American Indians are more than twice as likely to be diabetic as non-Hispanic whites, according to the Centers for Disease Control.)

Three years ago, Nike approached Mr. Stapp about being part of a team of consultants to design a shoe from scratch.

“Indians tend to have a wider forefoot,” he said, “but their heels are about average,” which means that when shoes fit in the front, there can be “heel slippage” in the back.

Of course, the shoes will fit many who are not Indians perfectly well, but it is unlikely that they will be able to get their hands (or feet) on them.

According to a Nike spokesman, the shoes, which will be shipped starting Nov. 1, will not be available at conventional retail outlets but only through Nike’s Native American business program, which distributes through Indian clinics and businesses, many on reservations.

Doctors who serve American Indians may have even more cause to nag their patients to exercise than doctors elsewhere. Along with a higher incidence of diabetes, deaths from heart disease are 20 percent higher than in the American population over all, while deaths from strokes are 14 percent higher, according to the Centers for Disease Control.

The shoes have an $80 suggested retail price and will be sold to the Native American groups for $42.80. The company says its first run of the shoes, which come in men’s and women’s models, will be about 10,000 pairs, and that all profits from those sales — estimated at $200,000 at first — will be put into American Indian communities through a Nike athletic program called Let Me Play.

While some have taken umbrage at the idea of designing shoes for a specific ethnic group, others take this all less seriously.

“When I heard it, the first thing I did is I laughed until I cried, because I just though it was hilarious,” said Sherman Alexie, a Spokane/Coeur d’Alene Indian and a novelist, who is on a book tour for “The Absolutely True Diary of a Part-Time Indian,” a young adult novel.