In Search for Manager, a New Leader Emerges

Joe Girardi, who is at the World Series as a commentator for Fox, was said to have impressed General Manager Brian Cashman with his managing experience.

DENVER, Oct. 28 — The Yankees will make their final decision on Joe Torre’s successor as manager Monday, according to Hank Steinbrenner, with an announcement likely to come Tuesday at the earliest.

Keep up with the latest postseason news on The Times’s baseball blog.

Go to the Bats Blog » 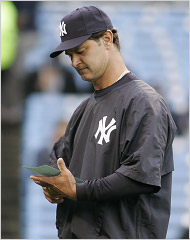 Don Mattingly has long been a favorite of George Steinbrenner to succeed Joe Torre.

“The decision will be finalized tomorrow, I would say so,” Steinbrenner said Sunday in a telephone interview. Asked if General Manager Brian Cashman had made a recommendation to ownership, Steinbrenner said, “Not as far as you know.”

Steinbrenner, a son of George Steinbrenner, the Yankees’ principal owner, offered no hints as to who the choice would be. But a person who has spoken with the Yankees’ decision-makers said he felt strongly that Joe Girardi would get the job. The person spoke on condition of anonymity.

Girardi, who is at the World Series as a commentator for Fox, said, “I’ve got nothing new for you.” He added that he had had no conversations with the Yankees since his interview last Monday.

Don Mattingly and Tony Peña have also been interviewed for the job, and Hank Steinbrenner said any of the candidates would be acceptable. “I think so,” he said. “They were all chosen for a reason. They were all impressive.”

If the choice is Girardi, George Steinbrenner could overrule it and select Mattingly, who has long been his favorite to succeed Torre. But Steinbrenner is all but retired now, and his sons, Hank and Hal, are running the organization. Hank Steinbrenner said he would listen to Cashman’s recommendation.

“The baseball people we have are the smartest guys in the game,” he said. “I’m not stupid. It’s not like I’m not going to pay attention to what they say.”

Girardi’s managing experience, as well as his reputation for being forward-thinking and impeccably prepared, are said to appeal to Cashman. Girardi, who spent last season as a YES broadcaster, is also highly sought by other teams.

The feeling around baseball is that if Girardi is not offered the Yankees’ job, he will be aggressively pursued by other teams. The same could not be said of Mattingly, who was Torre’s bench coach last season after three years as the hitting coach.

Still, while Girardi was the National League’s manager of the year for Florida in 2006, he was fired over differences with Marlins management. Mattingly’s personality would seem to be an ideal fit in the Yankees’ clubhouse and may translate better than Girardi’s with reporters.

Hank Steinbrenner said the fans and the news media must be patient as the Yankees wait to announce the decision.