Why Big Newspapers Applaud Some Declines in Circulation 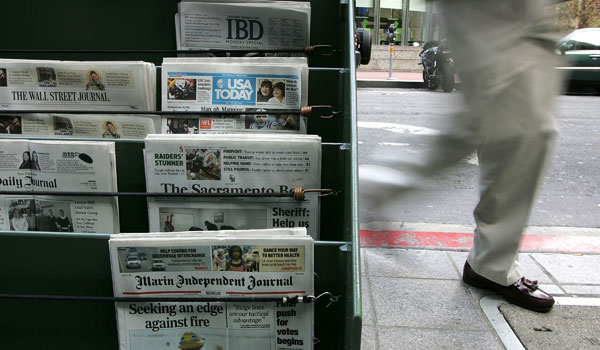 Many newspapers have stopped trying to attract customers with methods like promotional deals, saying they cost more than they deliver, and advertisers are more skeptical about the readers such methods attract.

As the newspaper industry bemoans falling circulation, major papers around the country have a surprising attitude toward a lot of potential readers: Don’t bother.

The big American newspapers sell about 10 percent fewer copies than they did in 2000, and while the migration of readers to the Web is usually blamed for that decline, much of it has been intentional. Driven by marketing and delivery costs and pressure from advertisers, many papers have decided certain readers are not worth the expense involved in finding, serving and keeping them.

That rational business decision is being driven in part by advertisers, who have changed their own attitudes toward circulation.

In the boom years, “there was more willingness by advertisers to assign some value to the occasional reader, the student, the reader who doesn’t match a certain profile,” said Jason E. Klein, chief executive of the Newspaper National Network, a marketing alliance.

But advertisers have become more cost-conscious and have learned how to reach narrowly tailored audiences on the Internet. Sponsors of preprinted ads that are inserted into a newspaper have been especially aggressive in telling papers that some circulation just is not worthwhile.

“The insert advertisers look to flood the area within five miles of their stores or flood certain ZIP codes,” Mr. Klein said. “They’re not interested in hitting a scattering of readers, and they don’t want to pay for it.”

As a result, newspapers have sharply curtailed their traditional methods of winning customers — advertising, cold-calling people and offering promotional discounts. That strategy was always expensive, and it has become more so with do-not-call laws and the rising number of people who have only cellphones. According to the Newspaper Association of America, the average cost of getting a new subscription order, including discounts, was $68 in 2006, more than twice as much as in 2002.

Most of the customers recruited with promotions and cold calls drop their subscriptions when the discount expires, so the cost of pursuing them and putting the news on their doorsteps can exceed what they pay for the paper. And despite falling ad sales, most American papers still make more money from ads than from circulation.

So the industry is accepting that circulation will fall and hoping to find a level that can be sustained with little effort. As a result, the subscription churn rate — the number of people who drop their newspaper each year divided by the total number of subscribers — fell to 36 percent last year from 54 percent in 2000, the newspaper association says.

There are exceptions to the trend; New York City’s tabloids, The Daily News and The New York Post, continue to scrap for as many readers as they can, even if many of them drift away. And some executives and analysts think newspapers have gone too far in cutting investments meant to cultivate new readers, like advertising on radio or distributing papers in schools.

“Newspapers have not spent a lot of money on that kind of self-promotion, and I think that has hindered our long-term growth,” said John Kimball, chief marketing officer at the Newspaper Association of America.

A prime example of the new approach is at The Los Angeles Times, which has lost more circulation in this decade than any other paper, falling to about 800,000 on weekdays in its most recent reports to the Audit Bureau of Circulations, from almost 1.1 million in 2000.

“There is a school of thought these days that you stop actively selling altogether and let the readership seek its natural level,” said Jack Klunder, senior vice president for circulation at The Los Angeles Times. “We’re not at that point, but we’re running far fewer promotions, accepting that some number of people are never going to buy the paper, long run, at full price.”

Like many other papers, The Times has also cut back sharply on advertising itself. “When the profitability stream of the paper is interrupted, you start to look at places to save on the expense side,” including advertising, Mr. Klunder said. “You need to advertise in the long run, but we make a lot of short-term decisions in this business.”

The New York Times’s circulation has held relatively steady in this decade, but that masks two opposing trends. In its home market, circulation is down, as The Times, like others, has cut back on promotions and discounting. But sales are up in other markets where The Times continues to pursue new, mostly affluent readers.

Some large papers have made conscious decisions to limit their geographic range. The most striking recent example is The Dallas Morning News. Last year, it stopped distribution outside a 200-mile radius, and weekday circulation tumbled 15 percent to a little over 400,000. This year, the paper imposed a 100-mile limit. It expects to show another drop in sales when new figures are reported this month.

“We were distributing in Tulsa, Oklahoma City, Little Rock, way down in south Texas,” said Jim Moroney, the publisher and chief executive. “It cost too much money getting the papers to those places, and this clearly wasn’t anything our advertisers were giving us value for.”

Many of the readers who were cut loose complained, “but I have no regrets,” he said. “The people who really want to read The Dallas Morning News can still get it online.”

An article in Business Day yesterday reported on a growing trend among large newspapers to accept some circulation declines because of the high expense of attracting and keeping new subscribers. The article was illustrated with a photograph of a delivery truck for The Philadelphia Inquirer and The Philadelphia Daily News and a caption that said “Big American newspapers sell about 10 percent fewer copies today than they did in 2000.” The Inquirer’s circulation, like those of other newspapers, has declined from its 2000 levels, but since new owners took over last year, its daily circulation increased almost 7 percent from September 2006 to March 2007, compared with the previous six-month period. The Philadelphia Daily News’ circulation also increased by slightly more than 1 percent in the same period. Neither The Inquirer nor The Daily News was mentioned in the article, and the photograph was an inappropriate illustration for it.