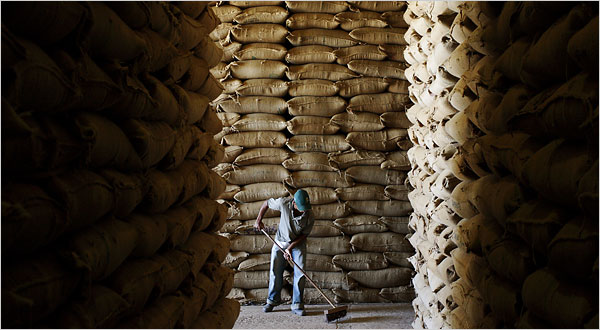 The fair-trade market is still small, but fast-growing, and it has been a boon in places like Varginha, Brazil, where coffee roasters like Café Bom Dia, above, work directly with small farmers.

VARGINHA, Brazil — Rafael de Paiva was skeptical at first. If he wanted a “fair trade” certification for his coffee crop, the Brazilian farmer would have to adhere to a long list of rules on pesticides, farming techniques, recycling and other matters. He even had to show that his children were enrolled in school.

More in the Cup

“I thought, ‘This is difficult,’” recalled the humble farmer. But the 20 percent premium he recently received for his first fair trade harvest made the effort worthwhile, Mr. Paiva said, adding, it “helped us create a decent living.”

More farmers are likely to receive such offers, as importers and retailers rush to meet a growing demand from consumers and activists to adhere to stricter environmental and social standards.

Mr. Paiva’s beans will be in the store-brand coffee sold by Sam’s Club, the warehouse chain of Wal-Mart Stores. Dunkin’ Donuts, McDonald’s and Starbucks already sell some fair trade coffee.

“We see a real momentum now with big companies and institutions switching to fair trade,” said Paul Rice, president and chief executive of TransFair USA, the only independent fair trade certifier in the United States.

The International Fair Trade Association, an umbrella group of organizations in more than 70 countries, defines fair trade as reflecting “concern for the social, economic and environmental well-being of marginalized small producers” and does “not maximize profit at their expense.”

According to Fairtrade Labelling Organizations International, a group of fair trade certifiers, consumers spent approximately $2.2 billion on certified products in 2006, a 42 percent increase over the previous year, benefiting over seven million people in developing countries.

Like consumer awareness of organic products a decade ago, fair trade awareness is growing. In 2006, 27 percent of Americans said they were aware of the certification, up from 12 percent in 2004, according to a study by the New-York based National Coffee Association.

Fair trade products that have experienced the biggest jump in demand include coffee, cocoa and cotton, according to the Fairtrade Labelling Organizations.

Dozens of other products, including tea, pineapples, wine and flowers, are certified by organizations that visit farmers to verify that they are meeting the many criteria that bar, among other things, the use of child labor and harmful chemicals.

There is no governmental standard for fair trade certification, the same situation as with “organic” until a few years ago. Some fair trade produce also carries the organic label, but most does not. One important difference is the focus of the labels: organic refers to how food is cultivated, while fair trade is primarily concerned with the condition of the farmer and his laborers.

Fair trade produce remains a minuscule percentage of world trade, but it is growing. Only 3.3 percent of coffee sold in the United States in 2006 was certified fair trade, but that was more than eight times the level in 2001, according to TransFair USA.

Although Sam’s Club already sells seven fair trade imports, including coffee, this will be the first time it has put its Member’s Mark label on a fair trade product, which Mr. Rice of TransFair called “a statement of their commitment to fair trade.”

Michael Ellgass, the director of house brands for Sam’s Club, said the company could afford to pay fair trade’s premium because it has reduced the number of middlemen.

“We are cutting a number of steps out of the process by working directly with the farmer,” Mr. Ellgass said.

Others argue that fair trade coffee is as exploitive as the conventional kind, especially in countries that produce the highest-quality beans — like Colombia, Ethiopia and Guatemala. Fair trade farmers there are barely paid more than their counterparts in Brazil, though their crops become gourmet brands, selling for a hefty markup, said Geoff Watts, vice president for coffee at Chicago’s Intelligentsia Coffee and Tea, a coffee importer.

But in Brazil, a nation with little top-grade coffee, the partnership between small producers and big retailers is a better blend, Mr. Watts said.

Most coffee farmers are organized into cooperatives, and some of that premium finances community projects like schools or potable water.

Like most of his cooperative’s 3,000-odd members — and three-quarters of coffee growers worldwide — Mr. Paiva, the coffee farmer (no relation to Mr. Marques de Paiva), farms less than 25 acres of land. He produces around 200 132-pound sacks for the co-op, with 70 percent of that sold as fair trade to Café Bom Dia.

The company would buy more if there were more of a market for fair trade coffee, it said.

The fair trade crop brought Mr. Paiva about 258 reais ($139) a sack, compared with about 230 reais for the sacks that were not fair trade. For the latest crop, that meant an additional 3,920 reais ($2,116) for him, a huge sum here in the impoverished mountains of Minas.

“It’s been great for us,” Mr. Paiva said with a huge, toothless grin. “I call the people from the co-op my family now.”

So do Brazil’s farmers. “Everybody is doing their best to come up to standard so we can sell our coffee as fair trade,” said Conceição Peres da Costa, one of the co-op’s growers. “Everybody wants to earn as much as he can.”